You open a box… 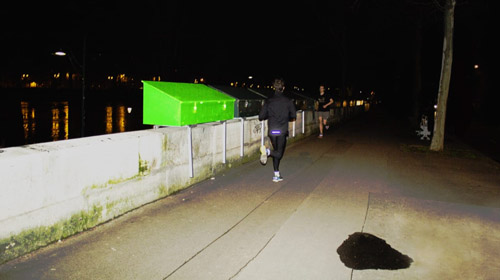 „You open a box…“ is an intervention in public space at Pont Marie in the shape of a Bouquiniste box used as a portable exhibition space.

„You open a box…“ brings together German speaking artists from the artist in residence program at Cité Internationale des Arts. The group had been meeting regularly for self-organised dinners and exchange rounds during a period when the grêve and Corona was radically changing the public spaces of Paris. The reinterpretation of the Bouqiniste boxes lining the banks of the Seine as a portable exhibition space, refects on a public sphere wavering between the fear of an invisible
threat and the euphoria of culture in Paris.

The bouqinistes
It has been said, that the Seine is the only river to fow between two book shelves. Much of the literature sold here since the 17th century was political agitation or uncensored boulevard newspapers, which would periodically be repressed by the state up until the city of Paris started issuing offcial concessions in 1859, thus gaining control over the content being sold. „You open a box…“ continues the tradition of the illegal trade in words and images that have taken place here during centuries past.